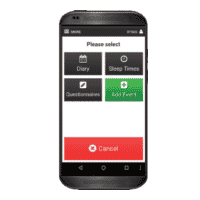 A new portable diary enabling patients to electronically record how often they go to the toilet could revolutionise the way doctors and clinicians treat common symptoms of the bladder and the lower urinary tract.

The UroDiary, which is the only device of its kind in the world and looks like a mobile phone, could save the NHS an estimated £66 million a year by providing doctors with a detailed breakdown of the frequency and timing of patients’ toilet trips, both in the day and night, so that these can be better analysed and treated.

Almost two in every three adults will suffer from at least one form of lower urinary tract symptoms in their lifetime – with symptoms impacting on the quality of life in up to 30 per cent of men older than 65. Lower urinary tract symptoms are commonly experienced by men with prostate cancer and women after childbirth. The NHS spends around £500 million a year treating urinary incontinence in adults.

The electronic device, which is currently in the final stages of clinical evaluation and not yet on the market, has been developed by Sheffield Teaching Hospitals NHS Foundation Trust, the National Institute for Health Research Devices for Dignity Healthcare Technology Co-operative and ELAROS 24/7 (the world’s first virtual lower urinary tract symptoms assessment clinic).

Professor Chris Chapple, consultant urological surgeon at Sheffield Teaching Hospitals NHS Foundation Trust and a Devices for Dignity theme lead, whose work led to the development of the device, said: “Lower urinary tract symptoms are very common, especially in older men and women. In most cases they are easily treatable but require accurate diagnosis. The UroDiary has the potential to transform clinical practice by providing doctors and clinicians across the globe with faster and more reliable data on lower urinary tract symptoms. This in turn could help doctors identify how these debilitating symptoms can be better managed and treated, either through lifestyle interventions, medical treatments or surgery.”

Jane Smith, (50) from Bradfield, Sheffield, who has suffered with bladder problems since the birth of her eldest child 15 years ago, said: “I was given the device to use for a few days, and it’s really simple to use. The continence nurse talked me through it, but I probably could have worked it out without any explanation. It’s really handy to carry around, and I even used it in a well known DIY store much to the embarrassment of my two children!”

Professor Chapple, who is also medical director for ELAROS 24/7, added: “Elderly people are at greater risk of falling or breaking their bones as a result of frequent trips to the toilet during the night. This in turn increases the likelihood of them needing long-term care so this device could really help improve their care.”

Over the coming months doctors from Sheffield Teaching Hospitals hope to roll out the device to Sheffield GPs. They also hope it will guide therapy, as current National Institute for Health and Care Excellence (NICE) guidelines state that any patient being treated for bladder and urinary problems relating to the lower tract should fill out a bladder diary.